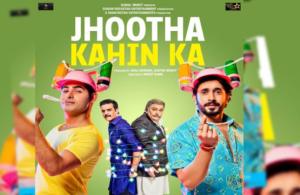 The story of the Jhootha Kahin Ka revolves around the life of two friends Varun (Sunny Singh) and Karan (Sunny Singh). Both, settled in Mauritius, fall in love but have a certain set of issues with their respective partners. Varun’s girlfriend Riya (Nimisha Mehta) doesn’t want to leave her physically-disabled dad Mr. Mehta (Manoj Joshi) after marriage. Whereas Karan’s girlfriend Sonam (Rucha Vaidya) is all ready to get married but there’s an issue.

According to Karan his elder brother, Tommy (Jimmy Sheirgill) is in the US but in reality, he’s just finishing his term in jail. Varun lies to Mr. Mehta of having any family to get married to Riya. Just after that, Varun’s father Yograj Singh (Rishi Kapoor) decides to surprise him. He lands in Mauritius with his brother-in-law Koka (Rajesh Sharma); coincidentally renting the bungalow next to Mehtas. Here starts the confusion & the story proceeds!