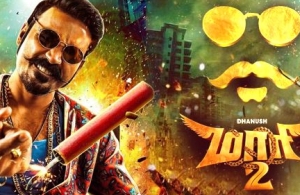 Picking up from the prequel, the film starts off with Maariyappan aka Maari (Dhanush) as the fun-loving gangster with his sidekicks Sanikkizhamai aka Sani (Robo Shankar) and Robert aka Adithangi (Punching Bag) (Kalloori Vinoth). Maari is chased around by Araathu Aanandi (Sai Pallavi), a “loosu ponnu” (lit. crazy girl) auto driver who is head over heels in love with him. However, try as she might, Maari does not give her a second glance and constantly shows his annoyance to her.

In a parallel storyline, Gangadhar Beeja (Tovino Thomas) is shown to have escaped from jail with the cell walls scrawled with the words “Kill Maari”. He is out for revenge, as his brother (Vincent Asokan), who was a lawyer, promised to get Beeja released from jail. Unfortunately, his brother is killed at the hands of Maari as the former tried to molest Aanandi’s elder sister. This is also the reason why Aanandi loves Maari.