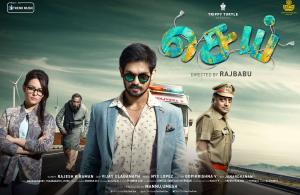 A mental asylum in the outskirts of Chennai catches fire and more than 30 of its inmates are charred to death. Minister Rajaratnam (Thalaivasal Vijay), who is forced to resign over the issue, is informed by a crime reporter that the death was a planned homicide by a mafia to cover up the thriving organ trade in town. Meanwhile, Saravedi Saravanan (Nakkhul), a happy-go-lucky-guy, who dreams of becoming a film star, is followed by Neena (Aanchal Munjal), a wannabe scriptwriter and her friends, as they find the former’s histrionics interesting.

One day, Saravanan’s father, an ambulance driver, who often curses him for not being a responsible son, gets bed-ridden following a heart attack. Hence, he disguises as the driver and carries a dead body from mortuary for money. Little does he know that the people who claim themselves to be the deceased person’s relatives are part of the organ trafficking gang. How he manages to escape from the dreaded group and brings them before the law forms the rest of the story.