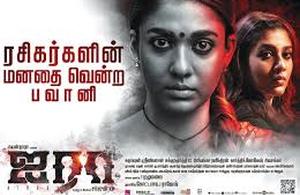 The movie starts off with Yamuna (Nayanthara), who is a journalist and also a YouTuber who makes a living by doing ghost videos. Not interested in marriage, she goes to her grandmother Parvathy’s (Kulappulli Leela) house in the rural area of Tamil Nadu. Her grandmother, despite being blind, has a sharper vision than some normal people. Yamuna’s pitches are mostly inspired by her grandmother.

The movie then cuts and shows Amudhan (Kalaiyarasan), who is investigating a string of deaths that have been happening in the area throughout the movie. Meanwhile, Yamuna, Parvathy, Mani (Yogi Babu), and Mani’s nephew Babloo (Ashwanth Ashokkumar) continue making fake ghost videos on YouTube, which eventually catches the public’s attention and goes viral. The movie then shows Amudhan, who is on a lookout for a few people whom he met in the local bar. After enquiring in a few places, he finds where the people live and goes to their houses. Suddenly, the same two people whom he had been looking for fall from the top of their apartment building to their deaths, which is actually the same way the other people have also died.