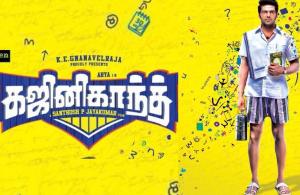 The protagonist, Rajinikanth (Arya), was born in a theatre screening Dharmathin Thalaivan, and like one of Rajinikanth’s characters in that film, has a forgetful nature. The film doffs its hat at the older film by introducing its protagonist in underwear as he has forgotten to wear pants. This condition of Rajini is a constant source of embarrassment to his parents Ramanathan (Aadukalam Naren) and Lakshmi (Uma Padmanabhan), as they cannot find a suitable match for him. One prospective girl’s father Sathyamoorthy (Sampath Raj) insults Rajini because of this. As fate would have it, Rajini ends up falling in love with Sathyamoorthy’s daughter Vandhana (Sayyeshaa), but she is unaware of Rajini’s forgetfulness. How long can Rajini continue with this facade, especially with Ajay (Lishesh), a cop who wants to marry Vandhana and is trying to expose him?