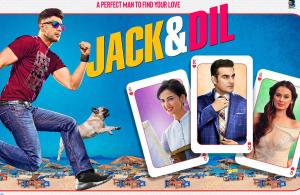 JACK and DIL is a modern day story of new age man Jack, carefree with little materialistic ambitions, earning as much to meet his daily needs. Jack’s only passion is to read detective novels so he could write one of his own too. Problem starts when the penniless Jack falls in love with the idea of buying a dog. Rich businessman Mr.Walia (Arbaaz Khan) is keen to sell his dog but their meeting takes an altogether different turn. Jack turns a detective and his quest to own the dog lands him into chasing the Businessman’s wife Shilpa ( Sonal Chauhan). The chase brings the two closer. But Jack’s deal is on the deadline to find out the mystery man in Shilpa’s life. Meanwhile Shilpa gets to know of Jack’s On – Off relationship with his model girlfriend Lara (Evelyn Sharma).Shilpa narrates her love story with Walia who is now totally focused on his business. Jack admits to his affair with Shilpa and the furious Walia refuses to believe it. Finally he realizes he has lost his totally neglected.