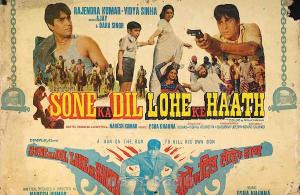 Shankar is a honest, simple-minded man who works for a kind-hearted boss, Balkishan. Shankar lives with his wife, Parvati, and a young son, Bunty. Shankar intends to borrow some money from Balkishan to further his prospects, and he goes to meet him, but instead finds him dead. The police arrest Shankar for shooting and killing Balkishan. Shankar’s pleas are ignored, and he is imprisoned for 14 years. Due to Shankar’s good conduct he is released after seven years, and on his way back comes across the real killer of Balkishan, Dinanath Mathur, and a confrontation ensues which ends with Shankar shooting Dinanath to death. This incident is witnessed by a young child, and Shankar goes after him to silence him.