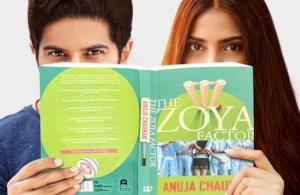 Zoya, who was born on the day that India won its first World Cup, became her father’s lucky charm. From there on she was the luck that made India win the matches (or so her father believed). Zoya grows up disliking cricket as a result of this obsession, till she comes at the romantic crossroads with the Indian cricket captain who is struggling to keep his team from losing. Enter Zoya and the team starts winning. The players believe she is their Lucky Charm — their 12th woman. What happens when the Lucky Charm of India romances the Indian cricket captain, who leaves nothing to luck?

The film is a light adaptation of Anuja Chauhan’s 2008 novel of the same name,[7] which follows the story of a girl, Zoya Solanki, who becomes a lucky charm for the Indian Cricket team during the 2011 Cricket World Cup, and the skipper Nikhil Khoda who doesn’t believe in luck and superstitions.