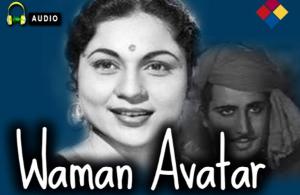 Based on the well-known story of King Bali, familiar to countless generations of Indians as “Waman Avtar,” the picture narrates the long struggle of that pious king against Indra’s band who had invaded the land of the Daityas and enslaved them.

It faithfully resurrects on the screen the perennially popular story of the Devas and the Daityas, kinsmen in a long-drawn-out struggle for power, and has a cleverly-written screenplay which emphasizes the principles of Panchshila—democracy, liberty and fraternity. It further explains the origin of the great festivals of Dhan Teras, Diwali and Ashadi Ekadashi.

Again, this film is happily free from a type of humor introduced into most mythological pictures by directors who believe that all comedy must be of the raw, boisterous kind.

In this respect “Waman Avtar” is an incomparably refined and dignified presentation of classical legend, having for its central character one the greatest heroes of the Golden Age of our country.