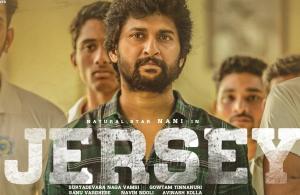 The movie starts in 2019 in New York City, where a young man buys a book called Jersey from a book stall but later gives it to woman who came to the same stall to buy the book. He is then told that the last copy was just sold. When the woman asks for the reason behind him giving the book to her, the man replies that the book was written after the life of his father, Arjun (Nani).

The movie moves back to 1986, where Arjun is an immensely talented Ranji player who is in love with Sarah (Shraddha Srinath). Arjun eventually quits cricket after being rejected into the Indian Team continuously because of game politics. He is given a government job in sports quota. However, he loses his job after being accused of bribery.