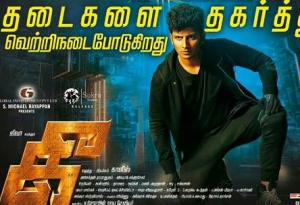 The story of Kee, too, revolves around a similar idea, but isn’t effective as the former, thanks to the lack of detailing, unconvincing screenplay and inclusion of commercial elements just for the sake of it.

Siddharth (Jiiva) is a hacker who is blessed with a happy family life, which include his father (Rajendra Prasad) and mother (Suhasini). An unexpected incident which happen in his life leads him to another hacker (Govind Padmasoorya), who’s a monster by all means. How the good triumphs over the evil forms the rest of the story. There are several computers, mobile phones and a slew of electronic devices which the antagonist uses to manipulate innocent people’s lives. The manner in which emotionally weak people are being exploited with the help of technology has been conveyed decently, but this is a subject which needn’t have romantic scenes with the usual cute heroines and forced comedies. The emotional angle in a crucial scene too falls flat and do not leave any impact.