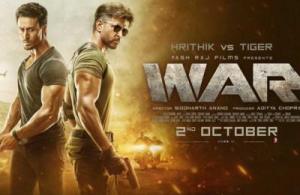 WAR is the story of two patriotic soldiers fighting against each other. Khalid (Tiger Shroff) is the son of an army officer who had joined hands with the enemies. As soon as Khalid’s mother (Soni Razdan) found out, she informed the army and the father gets killed by fellow officer, Kabir (Hrithik Roshan). For an important mission, Khalid is assigned a part in Kabir’s team. Kabir obviously is apprehensive but Khalid wins him over with his loyalty and bravery. The story then moves two years ahead. Kabir is assigned the duty of eliminating a dreaded terrorist. Instead of killing him, Kabir bumps off his commanding officer, V K Naidu (Mohit Chauhan). Khalid and others are shocked that someone like Kabir has gone rogue. Khalid is instructed to kill Kabir immediately before he causes any more harm. While Khalid is trying to find out Kabir’s whereabouts, the latter steals army equipment in a daredevil mid air stunt. In another act of bravado, Kabir comes in front of Khalid and informs him that his next target is a certain Dr Utpal Biswas (Arif Zakaria). What happens next forms the rest of the film.