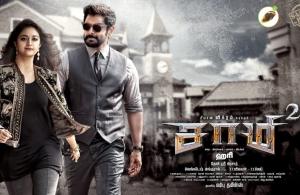 The film begins a year after the events which occurred in the prequel Saamy.

DCP Aarusaamy “Saamy” (Vikram), who had been transferred out of Tirunelveli, leads a happy life with his now-pregnant wife Bhuvana (Aishwarya Rajesh), who intends to pursue IAS. However, in Tirunelveli, Perumal Pichai’s (Kota Srinivasa Rao) men, who were discussing what happened to him, assume that he might be in Colombo, Sri Lanka with his second wife (Sudha Chandran) and three sons: Mahendra Pichai (O. A. K. Sundar), Devendra Pichai (John Vijay), and Raavana Pichai (Bobby Simha). Out of the three brothers, Raavana is the youngest. In Colombo, Raavana, after consulting his mother regarding his father’s whereabouts, leaves for Tirunelveli and finds out that Saamy killed his father. Raavana begins to hunt down men who turned approver against his father and takes back his father’s mantle. Saamy applies for a transfer to Tirunelveli to stop Raavana, which is approved.