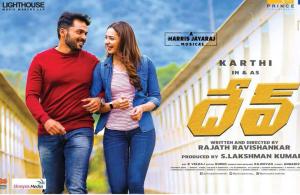 The first half of the film is shown via narration by Dev’s friend Vicky, who is a stand-up comedian. Dev Ramalingam, whose family lives and owns a small business in India, is an adventure-loving young man that is always in pursuit of new adventures; however, Vicky feels that Dev does not have a proper aim towards his future life. Dev always takes his friends in adventures, whereas Vicky wants to have a different life than Dev’s, who wants to have a normal office job rather than following his passion.

Vicky intends on getting Dev distracted so that he will not continue any other adventures, and instead begin a relationship with him. Dev is encouraged to love a girl and prevents Vicky from attending a job interview, where he later makes Vicky realise his talent in stand-up comedy and pursue it. Meghna Padmavati, who lives in the United States and is a CEO from a San Francisco startup, first appears when Dev sees her Facebook profile. He sends her a request and later gets disappointed when she does not respond. Later, he assumes that she is a businesswoman who ran a highly successful company on her own.