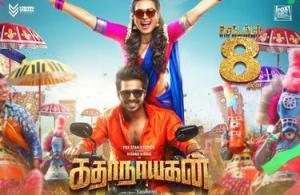 In Kathanayagan, Vishnu Vishal plays Thambidurai, a revenue inspector who is afraid of many things — from dogs to crossing the road or taking on goondas. It is this nature of his that lands him in trouble. He falls in love with Kanmani (Catherine Tresa), but her father (K Natraj, who is Vishnu’s real-life father-in-law) doesn’t approve of him as he is a coward. How does Thambidurai turn a hero in the eyes of this man and win the hand of Kanmani?

Perhaps it was the success of Velainnu Vanthutta Vellakkaran that made Vishnu Vishal pick Kathanayagan. Like that film, this one, too, is content to coast along on a bunch of comic scenes, hoping that the audience wouldn’t mind the uninteresting filler scenes between these set-pieces. However, while Velainnu Vanthutta Vellakkaran managed to do that, here, there is so much dead air between the comedy scenes that we get restless. All that Muruganandham uses are references to older films, and a few gags that don’t really seem funny when you think of them again. In fact, we laugh a little more for the comedy than we should because the rest of it is quite boring.