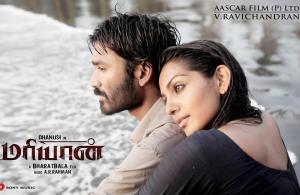 Maryan (Dhanush) is an aggressive fisherman who is slowly attracted to the feisty Panimalar (Parvathy) who is crazy about him. But Theekkurissi (Vinayakan) a local moneylender sets his eye on the beautiful Pani and wants to marry her in return to the huge loan that her father (Salimkumar) had taken. To get Pani, Maryan decides to go and work in Sudan, Africa as a construction worker under a contract of two years. But on the day of his return, he along with co-workers is abducted and held ransom by Africans to get money from the company they work for. ‘Does Maryan escape from the hot deserts where he is tortured?’ forms the rest of the story.