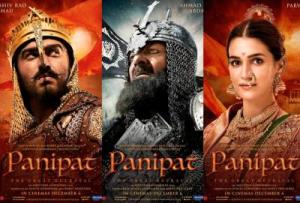 Ashutosh Gowariker’s magnum opus ‘Panipat’ is based on historical facts, taking some creative liberties along the way. Shadashivrao Bhau (Arjun Kapoor), is an able commander in his cousin Nanasaheb Peshwa’s (Mohnish Bahl) army. After a victorious battle against the Nizam of Udgir, Shadashivrao Bhau is chosen by the Maratha Peshwa to lead their army to Delhi. Ahmad Shah Abdali (Sanjay Dutt), the king of Afghanistan, has set his inroads into India after forming an alliance with Najib-Ud-Daula (Mantra) with the intention to defeat the Marathas and curb their expanding power.