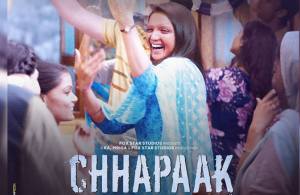 CHHAPAAK is the story of an acid attack survivor. The year is 2005. Malti (Deepika Padukone) is a 19 year old girl who gets attacked by acid on a street in Delhi. A good Samaritan takes her to the hospital. Her face is irreparably burnt, with no chance of it getting back to its original form. Malti however is determined to get the perpetrator behind the bars. Despite difficulty in speaking at the time of the tragedy, she manages to tell the cops that the attacker is Basheer Shaikh aka Babbu (Vishal Dahiya) and her sister Parveen. The cops arrest both and Babbu confesses that he indeed got the acid thrown on Malti. Shockingly, Babbu was a family friend of Malti’s and even made the rounds of the hospital to visit her, post the attack. In the court, Malti’s lawyer Archana Bajaj (Madhurjeet Sarghi) gives a tough fight but Babbu manages to seek bail on some grounds or the other. Archana stresses on maximum punishment though the law is not clear on acid attacks specifically. This prompts Malti to also file a PIL, asking for ban on the easy availability of acids. What happens next forms the rest of the film.