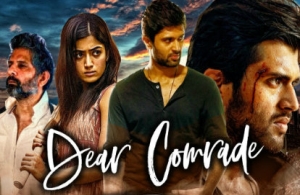 The movie begins with Bobby aka Chaitanya Krishna heavily drunk, dejected and angry. He is unable to come to terms with the fact that his girlfriend Lilly doesn’t want him in her life any more. The story now goes into flashback mode where Bobby is a leftist student union leader at a college in Kakinada, who has severe anger management issues. He fights for the students with right cause like his grandfather Comrade Suriyam. He fights with a local politician Bulliah’s brother due to whom a girl from his college attempts suicide on repeated torture from him to reciprocate his love. He even spends a night in the lock-up with his friends over this. While returning he runs into Lilly aka Aparna Devi who causes him a minor accident and as compensation, Bobby takes away all her money to fix his bike. He returns home and gets to know that Lilly was in fact his childhood friend and his neighbour’s daughter Jaya’s cousin who has come to attend Jaya’s wedding.