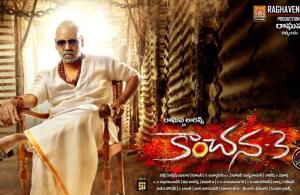 The ghost-fearing Raghava (Raghava Lawrence) and his happy family consisting of his mother (Kovai Sarala), brother (Sriman), sister in law (Devadarshini), and their daughter set out to Coimbatore for a family function, and there, the whole family, including Raghava’s cousins Priya (Vedhika), Kavya (Oviya), and Divya (Nikki Tamboli), witness strange and scary incidents, as well as Raghava getting possessed. The subsequent events return to another character named Kaali (Raghava Lawrence). Kaali is a social worker who runs an ashram which gives shelter and feeds poor people. He has also contributed to the studies of poor youths.