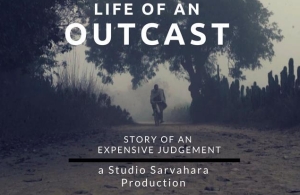 Life Of An Outcast’, as the name suggests is the story of a Dalit family and his struggle against caste oppression. The story revolves around the protagonist, a Dalit man of about 50 years old. In the very beginning of the movie he is seen cycling through the village roads visibly tired in his thoughts and middle aged body. It seems as if he is working after many years. Further through the story it gets revealed in a flashback that he was exiled from the village for marrying of his own choice and refusing to send his newly wed to the upper caste’s house for her first night. Now the family is living on the outskirts of the village. Then he recalls his life ahead where his son was not allowed to study English in school because of being a Dalit. He had still motivated him to study hard. In his final memory back through his life, he remembers how his son was jailed by for not writing ‘Om’ at the top of the blackboard and teaching his students rationality over religion in a school headed.