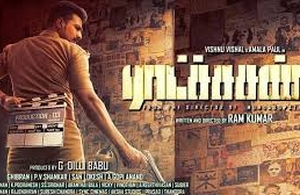 The film opens with two old men discovering a corpse which happened to be a teenage school girl named Samyuktha, a 15-year-old school student who was found brutally murdered and wrapped in a polythene bag.

Arun Kumar (Vishnu Vishal) is an aspiring filmmaker who wants to make a movie on psychopaths. After being rejected many times despite having a good script and due to pressure from his family, he decides to give up his dreams and become a sub-inspector with the help of his brother-in-law, Doss (Ramdoss), a police officer himself. He moves and stay with his sister Kokila (Vinodhini Vaidyanathan), Prasad, and their daughter Ammu (Abhirami). Ammu gets into trouble when she makes Arun forge her father’s signature in her report card as she failed in two subjects. Her class teacher Viji (Amala Paul) figures this out and thinks that she signed it herself. Ammu brings Arun to her school to act as her father. Later, which Ammu is caught by her parents, this leads them to transfer their daughter to another school. Later, Arun meets and befriends Viji and her niece Kayal (Baby Monica), who is speech deprived.