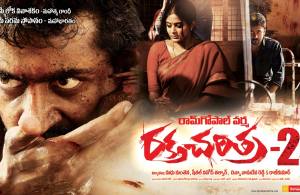 Based in Anandpur, Andhra Pradesh, Pratap Ravi, who lives with his expectant wife, Nandini, is fully engrossed in avenging the brutal death of his father, Veera Bhadra and brother, Shankar. He is now invited by actor-turned-politician, Shivaji Rao, to join politics and end the bloodshed. Pratap does so, but must face off against a vengeful male, Surya, who blames him for the death of his family in a TV bomb blast. Pratap not only manages to elude Surya, but through DCP Mohan Prasad, has him arrested and sent to prison. Ready to contest elections, he is faced with another adversary – Surya’s wife, Bhavani. He decides to kill her but is prevented by his very own wife. With Bhavani’s increasing popularity, and Surya joining forces with opposition leader, Krishna Swamy, Pratap finds his life in danger and decides to organize a meeting of all political leaders in the region – a decision that may well change his and everyone’s lives.