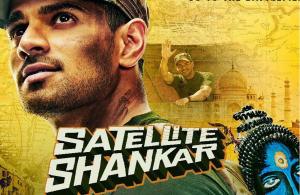 Satellite Shankar is the journey of an Indian soldier, KPG Shankar (Sooraj Pancholi), who can temporarily teleport his fellow jawaans to their near and dear ones using a gadget that has something to do with Lord Shiva. He believes you only need to form connections in your heart and you can be anywhere and with anyone you want. That makes him the hero of his battalion. Okay then!

Moving on, Shankar is on a sick leave for eight days owing to an injury sustained during crossfire at the border. Instead of resting at the hospital, he wants to visit Pollachi in Tamil Nadu to see his mother before she undergoes an eye surgery. During the course of his journey from ‘Kashmir to Kanyakumari’, he encounters various roadblocks but how he soldiers on is what the film is all about.