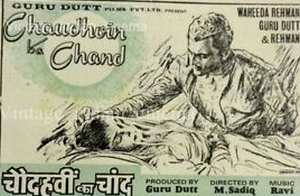 The setting is the city of Lucknow in northern India, where Islamic culture flourished. Two of the three best friends who live in this city have fallen in love with the same woman named Jameela. Aslam (Guru Dutt) and Nawab (Rehman) are the two friends caught in this love triangle with Jameela (Waheeda Rehman). An integral part of any Guru Dutt film, comic relief was provided by Johnny Walker, who plays Mirza Masaraddik Shaida.

This film was a box-office hit, one of the top-grossing films of 1960.production of Guru Dutt, the film centers on a love triangle between Guru Dutt, Rehman and Waheeda Rehman, and features music by Ravi. Farida Jalal makes a guest appearance in the film, her debut. After the disastrous box office performance of Kaagaz Ke Phool, this was a highly commercially successful comeback film for Guru Dutt, which saved Guru Dutt’s production studio from ruins.