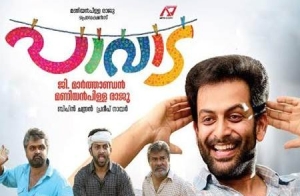 An alcoholic duo, met at a de-addiction center helps each other to arrange their lives back together with their persistent illness. Pambu Joy’s (Prithviraj) married life is in a muddle due to his alcoholism. Pavada Babu’s (Anoop Menon) life is in pieces due to a film he produced in which Sicily, Joy’s mother, was the heroine. For financial gain the film was adulterated by his friend Eldho (Shajon). Eldho intends to re-release the film’s 3D extended version. Both Pambu Joy and Pavada Babu fights through their alcoholism to stop the re-release of the film due to the added pain that will cause for Babu and to Joy’s mother Sicily.