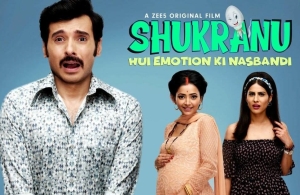 Set in Delhi/UP/Haryana, Shukranu is a comic take on the darkest phases of Indian democracy through the encounters of a would-be groom who is forcefully sterilized just days before his much-awaited marriage. The trailer itself spoils so many things of the script that there is nothing to hide or reveal. The central character Inder (Divyendu Sharma) who marries to Reema (Shweta Basu Prasad) feels awkward to reveal about his vesectomy. When things are finally going good between Inder and Reema, Inder is shattered by the news of Reema being pregnant. Inder who is living with his best friend finds a new girlfriend Aakriti played by Sheetal Thakur to forget the humiliation of his wife’s pregnancy and then things turn totally chaos between these 3.